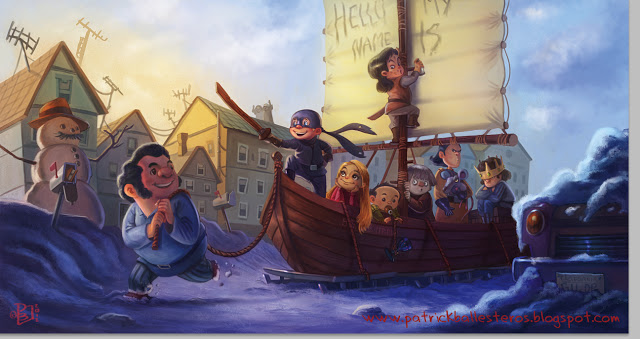 Patrick Ballestreros 'As You Wish'

Well, the world did not end today.  So that's a good thing.

And Patrick Ballesteros added to his kids drawings with an ode to The Princess Bride (which is almost as good as the Firefly one) so that's also good.

I've stayed away from the news of the events in Newton.  I know the gist of it, I know what happened and that is enough.  My heart continues to ache for everyone.  Everyone.  I think of how Ray let me sleep in that morning and I didn't get to see Emma before he took her to school.  I just can't imagine.

And so here we are, so close to Christmas and a New Year.  The news is full of people being awful to one another or complaining about insignificant things.  Still, hidden behind all the selfishness you can find the gems.

So here's a collection of good news stories.  I'm not saying they won't make you cry.  Some of them are good in that way too.  But I hope all of them bring a little bit of your heart some peace.

Stranger Buys a Car for Teen with Cancer
Hana Berg has been going to cancer treatments off and on for a year and unable to attend school.  One of the teachers assigned to help homeschool her, Lea Mattson went online to ask friends if anyone could help out with rides after the family car died.  One of her friends asked her to come over and pick up some money and go buy a car.  So that's what she did.

Anonymous Donor Pays Off 43 Walmart Lawaways
Someone donated $10,000 to pay off Christmas layaways at a Walmart in Hastings, Michigan.  $7,800 was used to pay off the layaways and rest was given to a local charity.

Boy with Cancer Gets a Visit From Heroes
So far this one is my favorite.  Five year old Nathan Norman is battling a rare form of cancer.  He was asking for Christmas cards from heroes.  He thought that would cheer him up.  A group of police officers, firefighters and first responders went a step further and delivered the cards in person.

Alec Baldwin Donates Thousands to Save Library
The headline pretty much says it all!  A year after donating $10,000 to save the Central Falls Memorial Library in Rhode Island he donated another $5,000 in response to an end of the year fundraising effort.

Eastman Student Gets a Tuba Surpise
Did you know that tubas cost around $13,000?!?!  I did not!  Tara Fayazi has played the tuba for years and is at Eastman School of Music as a Performance major.  She's always borrowed the school's instrument until her friends went behind her back and created a Facebook page to help raise money to buy Tara her own tuba!

Deaf Dog Learns Sign Language
After her Dalmation passed away, Jill Chanel knew she'd want to adopt another and decided to adopt a rescue dog.  She found a group that saves deaf Dalmations from being put to sleep and knew that was the dog for her.  Her other dog is a therapy dog and she was determined that Whitney would be too so she started training her using American Sign Language!

Awesome, Awesome Kids
Three kids who show us that it doesn't take a lot to make a huge difference.  Maybe this is my favorite story now.

3000 Bags of Food Given Out
The Latin American Chamber of Commerce hands out 3,000 bags full over everything needed to make traditional Noche Buena dinner to the needy in Little Havana.

Wounded Soldier Receives Keys to New Home
During his second tour in Iraq Sgt. Kenneth Harker was wounded by a bombing.  After recovering at Walter Reed Hospital for three years he returned to a home that was difficult to get around in with cramped hallways and narrow doors.  Four years later, thanks to Homes for Troops he and his family now how a wheelchair accessible home to celebrate the holidays in.

12-Year-Old Girl Saves Bus
When 12-year-old Rana Kraftson noticed her bus driver was unconscious she ran to the front of the bus and pressed her hand down on the brake, saving the bus full of kids from hitting a tree on their way to ski practice.  The bus driver had suffered a stroke and has since recovered.

So there's a few articles and I know there's more out there.  When I find them I'll share.  Happy Friday everyone!!

Email ThisBlogThis!Share to TwitterShare to FacebookShare to Pinterest
Labels: life, news, things that are awesome