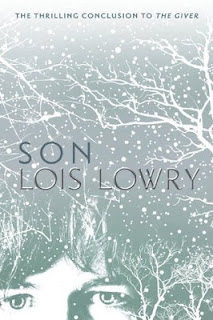 Nearly 20 years after first introducing young readers to Jonas in The Giver Lois Lowry brings us the fourth and final book in the series with Son.

In my opinion, The Giver and the subsequent books (Gathering Blue & Messenger) paved the way for the modern YA dystopian novel.  Lauren Oliver's Delirium & Ally Condie's Matched series borrow quite heavily from Lowry's world and ideologies.  And back in the early 90's Lowry got plenty of flack for writing children books that spoke of themes other adults didn't think kids would understand.  But they did.  So much so that she revisited the series again to finish the story she began so long ago.

For those of you who are unfamiliar with The Giver series you should immediately go out and get familiar with it.  It's stunning.  It's honest and raw and simple, but complex.  It tells a story that must be told and it's beautiful and ugly all at the same time.  I loved them more than I thought I would.

In Son we get to close the circle.  I really can't say much more about the plot than that without spoiling everything.  I loved this just as much as the rest of the books, but I did feel like there were some parts that she took so long on that she had to compromise with parts I thought should have been more detailed.  It gets a little hokey near the end, slightly deviating a bit much, but you can forgive Lowry because everything else is just so brilliant.